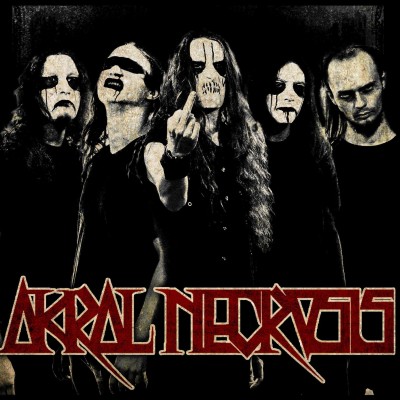 Akral Necrosis was formed in 2006, emerging from a scene of mostly melodic bands. From the first day, the band members decided to walk a different path by choosing to create music and a blend of black and thrash metal which would reflect their lust for harsh and aggressive metal, but also leave place for experiments. The bands shows have been praised through the years by the public and also the media, sharing the stage with Hecate Enthroned, Cirith Gorgor, Ancient Rites, Necrodeath, Eastern Front, Cadaveria, Keep of Kalessin, Onslaught, Endstille, Absu and many more. From 2006 to the present day, Akral Necrosis has constantly played festivals and clubs, while releasing their first single in 2008, entitled “Slay the Whore” through Salute Records from Sweden. The single was followed by a self released EP – “Outcast Litanies” centered around a new single, “Pandemic Dominion” which was chosen by Terrorizer Mag for their New Blood compilation in 2011. After a short while, the band released their first official video for “Pandemic Dominion”, directed by the well known Costin Chioreanu from Twilight13Media. In 2012, the first album saw daylight – “Pandemic Dominion” was very well received by fans of the band. The album featured 8 tracks, all surrounded by a specific concept. At this moment, Akral Necrosis is working on a new split, but also on their second album.

“Romania isn’t often the first name on the lips those looking to check out thrash and death-injected black metal, but on the basis of what they’ve released thus far, Akral Necrosis look set to be the band to change all this. Crunching, biting and yet still deceptively melodic.” – Terrorizer #213, August 2011

…alternates between extreme black metal blast beats and cool riffs, solos, breaks and everything that makes this music sound good… AKRAL NECROSIS showed everyone present that they are a band that has grown a lot…” – Costin ‘13’ Chioreanu, Twilight13Media (Mar 15, 2010)