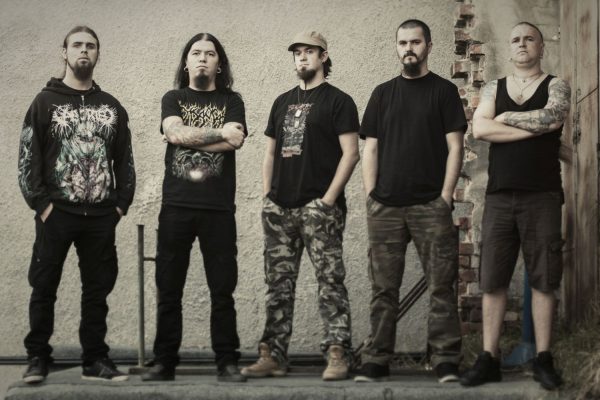 The entire story began in the autumn of 2009 at the initiative of Florin (drums), widely known to the extreme metal audience for his presence in NECROVILE (one of the Romanian extreme metal scene pioneers since 2001) and Cristian (vocals), recently left from the underground extreme band called SKULLP. MALPRAXIS’s line-up has been fully completed in the same year, two months later, by Vali (guitars) and Ionut (bass), both of them agreeing to join the brutal team. Only for a short period of time, Dan (rhythm guitar) enters the band, but retires quickly because of some personal reasons. In the Spring of 2013 the guitarist Vali left the band, so that a quick and at the same time benefic change was produced inside the crew – Ionut made the switch from Bass to Guitars and a new member, Attila, joins MALPRAXIS on Bass. Once with his arrival, Attila influenced the way of all things inside the band due to the experience gained from his presence as an active member (in the past years as musician) in the best Romanian extreme metal act – NEGURA BUNGET. In 2014, Ionut left the band and two new guitar players joined, Tamás Wagner and Emanuel Praţa, so the current members of MALPRAXIS are: Tamas (Guitars), Emanuel “Ilu” (Guitars), Attila (bass), Cristian (vocals) and Florin (drums) – the five death metal maniacs winning formula.
For sure MALPRAXIS is a death metal band playing a balanced mix between brutal death metal and slam death metal styles. Influences are coming from a large area of metal (death, thrash, even progressive) but basically death metal represents the overwhelming percentage in this equation. Old school death metal bands like Cannibal Corpse, Suffocation, Deicide, Dying Fetus, Hate Eternal, Broken Hope, as well as brutal bands like Origin, Disgorge (both U.S. and Mexico), Gorgasm, Deeds of Flesh, Vile, Devourment, Skinless, Nile, Pathology, Cryptopsy, Condemned, Guttural Secrete, Defeated Sanity, Wormed, Disavowed, Severe Torture, Abominable Putridity, Katalepsy (and the list of bands can easily continue) had left their mark on us, individually and especially on our music. And as the famous word say – We are what music we listen to, we are death metal heads – because death metal is more than music, death metal is a lifestyle!