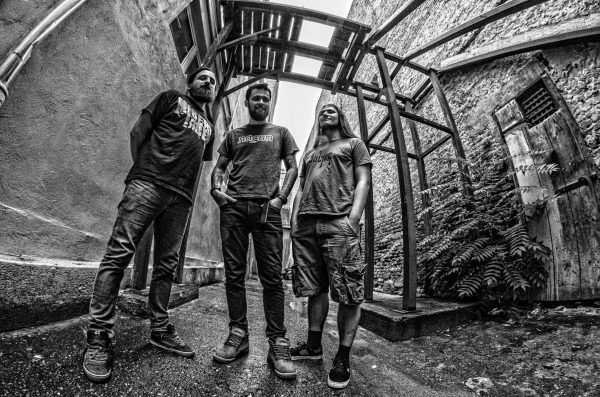 The band’s first important steps started in 2008 with a series of concerts in Romania and abroad. In 2010 Spiritual Ravishment releases its first album Children of the Atom through Axa Valahă Productions. The line-up for the album was: Sebastian Stancu (vocals), Andrei Bejușca (guitars), Lorand Deme (bass) și Ali Said (drums). In 2013 the band recruits a new drummer, Mihai Pârvan for the following live shows.
SPIRITUAL RAVISHMENT had many notable live appearances, including shows in their home country, as well as abroad at some of the biggest festivals (Hungary, Slovakia, Austria, Germany, Bulgaria), also sharing the stage with bands like NAPALM DEATH, MISERY INDEX, SUICIDE SILENCE, LIVIDITY, GOD DETHRONED, DECAPITATED, ORIGIN, PSYCROPTIC or HATE.
The upcoming SPIRITUAL RAVISHMENT album, entitled Exit Humanity, is a potent mixture of grindcore/death metal and was recorded by the trio Sebastian Stancu (vocals), Andrei Bejușca (guitars, bass) and Andrei Jumugă (drums).
Exit Humanity follows the story of a species going mad in an absurd battle for supremacy. It’s the story of a world in which man learns nothing from the mistakes of the past. Moreover, it repeats the same patterns in a boorish cycle fueled by the primal instinct. The album continues the narrative of “Children of the Atom”, the protagonists being a new race of people, risen from ruins, lead only by survival and auto preservation.
Recordings for the material took place at Postanalog Studio in Oradea and Consonance Studio in Timișoara. Mixing was done by Tudor Scânteie and Andrei Jumugă, mastering was done by Marius Costache.