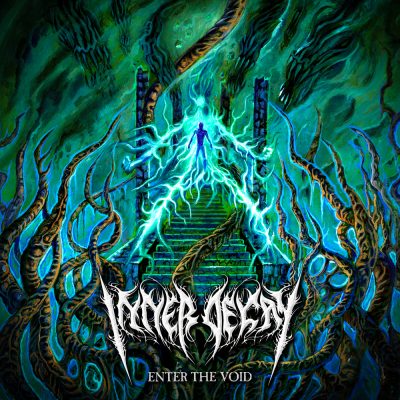 Chicago, Illinois based Death Metal purveyors INNER DECAY announce their second full-length album is completed and ready to be released! Titled Enter the Void, the band’s new material will be soon released in collaboration with Pest Records, and here’s what the band commented on it:

“It’s been a challenging couple of years. The pandemic hit the world hard and things came to a major slow down, we even had a member who recorded his parts at home while he had Covid, but we kept pushing and made it through as a band. With the hardship of the pandemic slowly moving behind us, we’re very proud to announce the result of our hard work which is our upcoming album “Enter the Void”.

Our sophomore album is heavier and with an improved sound compared to our debut “Souls of War”, but still with a solid dose of epic melodies and catchiness. We’re coming back with the new lineup and with it comes a fresh quality. Our foundation is still the same with Tom as the main songwriter and Silvestre giving a punishing performance with his one-of-a-kind brutal vocal style.

Though our new additions made a big difference for the band’s music; Alfred with his powerful bass lines and song writing prowess that added new dimensions for the band’s songs, Dave with his pulverizing drum beats that set the feeling and rhythm perfectly, and Aaron who worked side by side with Tom going back and forth between shredding and melodic guitar solos. We are excited to release this album, and can’t wait to share it with the world.”

The first single, Death Of The Sun, is now online here: https://youtu.be/s-Hp0Y7Uuqw

Despite a few line up changes, Inner Decay has kept the same style and feel from day one thanks to Tom’s killer writing style and Silvester’s brutal vocals. This band played number of shows across Midwest states of Michigan, Wisconsin, Illinois, Indiana Kentucky and remains very active in Chicago metal scene.

During then 2020-2021 pandemic, Inner Decay had written and recorded their follow up album that is titled “Enter the Void”. The album is complete and ready to be released.